CORPUS CHRISTI, Texas – Since 2004, Izzy the Islander has been the official mascot of the Texas A&M Corpus Christi campus. Loved by some, others have described Izzy as insulting and racist.

According to records obtained through a public request for information, some students and faculties want the university to stop using the mascot.

Among the faculties that want a change is Associate Professor Chris Bird, who spent 14 years in Hawaii. As a former member of the Faculty’s Senate, he brought up the issue of Izzy.

The faculty senate asked the Hawaiian Affairs Bureau (OHA) for an assessment of Izzy. The result?

The traditional tattoo and mask of the mascot is in the shape of a sacred ki’i. It uses the traditional cultural knowledge and expression of the Pacific islanders. Tattooing inaccurately depicts relevant practices today and is sacred, the report says.

These are the tattoos that the OHA identified. Kakau uhi expresses ancestral relationships and personal responsibility. Ki’i is known as the well-known Tiki figure and represents the honor of ancestors, traditional gods and the connection to the environment. Finally, Mo’ai represents ancestral connections that are specific to the Rapa Nui culture.

Who is Izzy the Islander?

“I think the main point of the OHA letter was that the problem arises when the cultural elements are used to make money,” Bird said.

“I think it can be harmful to these groups,” said Dr. Mia Moody-Ramirez, an expert in media advocacy for minorities, women and underrepresented groups at Baylor University. “Especially when something is borrowed without individuals knowing the history and background.”

OHA also addressed some of the traditions associated with Izzy. The shaka and lei given at graduation are fine on their own. They are used worldwide. The Shaka is a Hawaiian greeting. The lei is an expression of tenderness. The problem they have is when paired with Izzy it becomes a stereotype. Moody-Ramirez said the whole combination was offensive.

“It’s not just the mascot, it’s the other things that come with it. So that’s what we see here,” said Moody-Ramirez. “Not only is Izzy wearing a mask and Izzy not only having the tattoos, but you also have people doing the signs that are important to Pacific island culture. But then the people who do that don’t know what’s behind them . That is insulting. “

The report strongly suggests that the university change its mascot. What do the students have to say on campus?

“I’m obviously not a Pacific Islander so I don’t have much feelings for it,” said Samuel Canis, a student at Texas A&M University at Corpus Christi. “But I’m sure someone who was a Pacific islander saw this, it could be offensive.”

“Mascots in general have been pretty vulgar lately when it comes to depictions of cultures,” said Chris Gochnour, a student at Texas A&M Corpus-Christi. “You see that with the (Washington) Redskins, Chicago Blackhawks, stuff. So, you know, it’s not right, but it goes with the story.”

“Maybe we just don’t know enough about this culture,” said another student, Kaylynn Limon. “Yeah, I can see – probably not knowing enough, just having it on campus, just walking around with your tiki head. I understand, you probably thought it was insensitive.”

The mascot’s withdrawal is a way to strengthen the university’s position with minorities, Bird said.

“In order for the university to finally get rid of the idea that they might be insensitive to minorities because this is an institution that serves minorities, it seems easy to embrace Texan culture,” Bird said. “Embrace South Texas. Embrace what makes it special to be an islander in Corpus Christi.”

Acquired through a public request for information.

The recommendations of the Senate of the TAMU-CC faculty.

The Faculty’s Senate approved the report. You have asked the government to officially retire Izzy and apologize to the Pacific islanders.

How did the university react?

Before the New Year, University President Kelly Miller shared a statement with the faculty’s Senate. Izzy’s image would be reduced and removed from the athletics website. A task force is to be set up in spring to redesign the mascot.

This task force met twice, according to university officials.

A poll was also sent out asking for opinions on Izzy, where the mascot talked about removing his mask and a mask that focused on the COVID-19 pandemic rather than cultural appropriation. 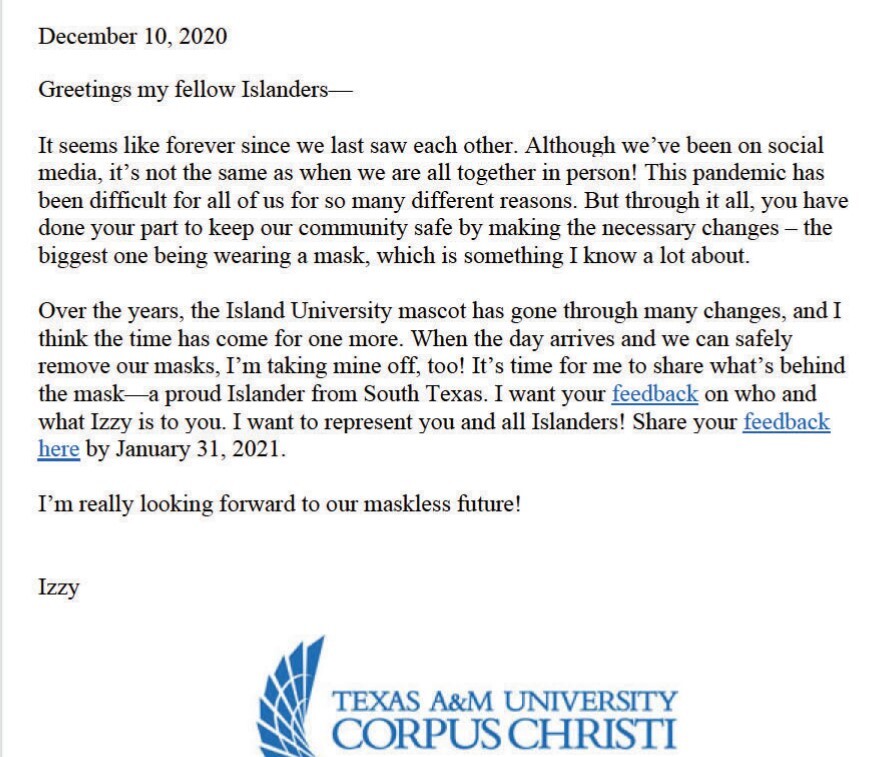 Acquired through a public request for information

This letter, sent from Izzy’s desk, speaks about the exposure of Izzy.

“The way the university community was asked about this was, ‘Hey, we’re going to take off Izzy’s mask, who’s under the mask?'” Bird said. “Not, ‘Hey, there are problems with Izzy’s origins and characterization of a colonized minority in the United States.'”

“I like the idea that it coincides with the repeal of the mask ordinance,” said Moody-Ramirez. “However, I still think they still have background and contextual information and need to share information on the report.”

We asked TAMU-CC for an interview which they declined. Instead, they made a statement.

They said they started discussions about Izzy before the pandemic. Now with OHA feedback, they are working with a task force to find solutions. There are plans to continue using the Islander name as it is a piece of university history.

Moody-Ramirez said this was something that all universities go through in some way. In Baylor she is a member of a committee that discusses historical sights on campus.

The full TAMU-CC instruction can be found below.

Prior to the COVID-19 pandemic, the university began internal discussions about updates to the current mascot, Izzy. To encourage these discussions, the university conducted an official survey to gather feedback from students, faculties, staff, and alumni. Additionally, the university’s faculty senate proactively reached out to the Hawaii State Bureau of Hawaiian Affairs (OHA) for feedback on our images and traditions. We learned from OHA that some of our Islander images, specifically related to Izzy, are cause for concern. Fortunately, many of our traditions, such as the lei and the shaka, are considered widespread in many areas outside of Hawaii and are not offensive unless combined with the characterization of Izzy.

A diverse task force of representatives from across campus is in the initial stages of evaluating all of this feedback. While it is too early in the process to report results, the committee has been tasked with addressing the concerns of the OHA and those raised in the survey while working to preserve our unique history and better represent the uniqueness of our region. The university will continue to use the name “Islanders” as that name was chosen and approved by students at Island University. This name continues to bring together alumni from every chapter of the university’s history while ensuring that we are representative of the Coastal Bend community.

This is a serious responsibility that the university does not take lightly. It takes thoughtful and thorough discussion and planning as we move forward. We continue to hope that our timeline will allow us to link the unveiling or “unmasking” of our new mascot to the unique situation we find ourselves in in the face of masks and the COVID-19 pandemic. 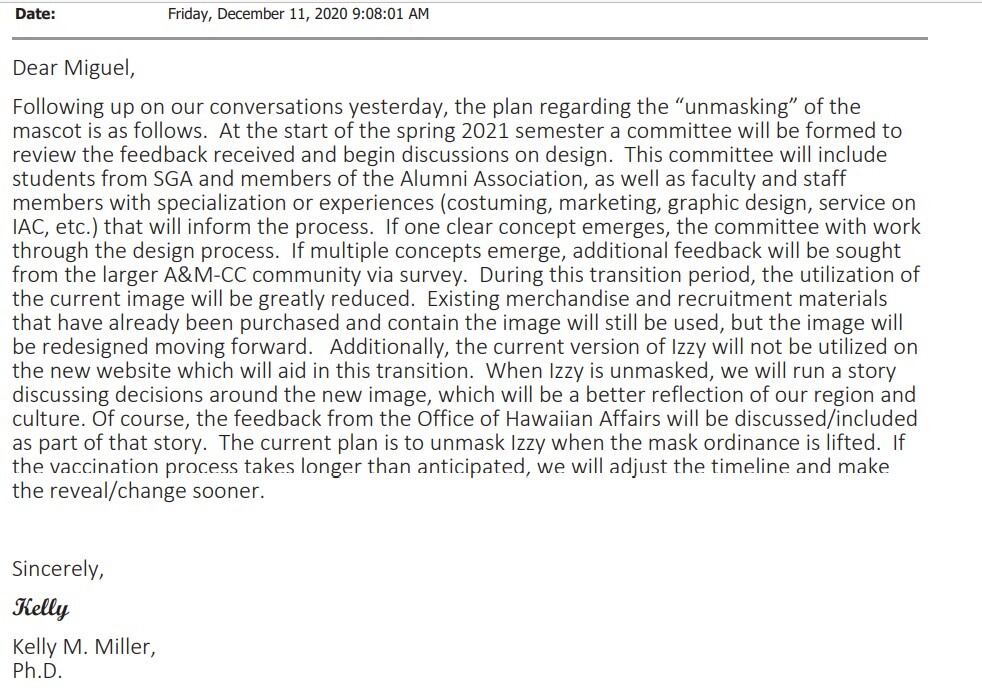 Acquired through a public request for information.

A letter from the President of TAMU-CC, Dr. Kelly Miller.

Send your questions to the Mayor of Corpus Christi here